Kamlesh Kumar Dhuriya has been selling laiya chana outside Prayagraj’s Motilal Nehru National Institute of Technology (MNIT) for over a decade.

“Just a few years back, there used to be a traffic jam here everyday from 4 o’clock in the evening to 9 o’clock at night. If an ambulance got stuck here, there was no hope of it reaching the hospital in time. People died on the way. Since the day this road has been widened, there has not been any traffic jam here,” Dhuriya said, with Manoj Kumar, a temporary employee of MNIT, nodding in approval.

Dhuriya’s and Kumar’s comments came as no surprise. As this correspondent crisscrossed Purvanchal — the eastern part of Uttar Pradesh — during the Lok Sabha elections, the state government’s road infrastructure push was clearly visible, and its effect palpable, as a large number of people echoed similar sentiments.

“Were roads ever this good? I don’t remember seeing a road better than this in my life,” said Gangesh Gond, who has a small transportation set-up in Phulpur’s Indian Farmers Fertiliser Cooperative mandi. Gond was referring to State Highway 7 that links Prayagraj and Gorakhpur.

Nearly 250 km away, in Gorakhpur’s Campierganj, Phool Chand Nishad, who works in the construction sector in the Gulf, said, “The speed of development in this region has doubled. You can see new roads being constructed wherever you look.”

It was clear that this sentiment was translating into votes, as these men had told this correspondent in the first week of May that they were supporting the BJP. Of course, better roads may not have been the only reason why they were selecting the BJP over its rivals, but it was definitely one of the important ones.

Chief Minister Yogi Adityanath knows this and has decided to double down on his efforts.

In a meeting on 29 May, just five days after the election results, Adityanath brought forward the deadlines for the completion of four expressway projects in the state to make sure they are completed in time for him to add these as the achievements of the state government when the state goes to polls next in 2022.

Following up on 2 June, Chief Secretery Anup Chandra Pandey inspected the under-construction Purvanchal Expressway from air. Adityanath wants the 350 kilometer long expressway to be complete by August next year and work on two other projects — the Bundelkhand Expressway and the Gorakhpur Link Expressway — to start in three months. He has also ordered survey work for the ambitious Ganga Expressway linking Meerut and Prayagraj to begin in the next three months.

Work on the Purvanchal Expressway began last year and, according to Chief Secretery Pandey, around 10 per cent of construction has been completed, along with over 40 per cent of the earth work, around 90 per cent of clearing and grubbing (removal of trees and stumps) work and about 96 per cent of the land needed for the project acquired. The remaining land will be acquired in the next 15 days.

The expressway is being built under the Engineering, Procurement and Construction model, which means that the contractor will be responsible for all the activities from design, procurement, commission, construction to the handover of the project to the end-user. Uttar Pradesh Expressway Industrial Development Authority (UPEIDA), the body responsible for the expressway, has divided the project into eight packages. Three firms — Gayatri Projects Limited, GR Infraprojects and PNC Infratech Limited — have already been awarded two packages each while Apco Infra Private Limited and Oriental Structural Engineering have been awarded one package each. 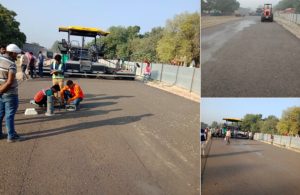 The project, introduced by the Samajwadi Party government, was initially delayed as the Adityanath government found that the bids received for the eight packages of the expressway were overpriced. These bids were cancelled in June 2018. New bids were invited and contracts swiftly awarded in June, and the government managed to save Rs 600 crore in the process. If the UPEIDA is to be believed, the original bids were overpriced as the bidding companies “joined hands and worked as a cartel”. Major infrastructure players such as Reliance and AFCONS failed to qualify for contracts in the second bidding while relatively smaller firms such as the Agra-based PNC Infratech and the Lucknow-based APCO Constructions made the cut.

The six-lane expressway will link the state capital Lucknow with Ghazipur, the easternmost district of UP, passing through Barabanki, Faizabad, Amethi, Sultanpur, Azamgarh and Mau. It will provide the backward districts along the eastern boundary of the state seamless connection to the National Capital Region via Lucknow, Agra and Noida through the Lucknow-Agra Expressway and the Yamuna Expressway. 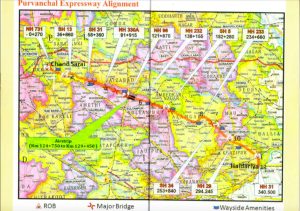 The expressway will have an impact on six of the 15 Lok Sabha seats—Azamgarh, Lalganj, Ambedkarnagar, Ghosi, Mau and Ghazipur—where the BJP lost to the Samajwadi Party-Bahujan Samaj Party gathbandhan.

As the name of the project suggests, this expressway will link Gorakhpur with the Purvanchal Expressway in Azamgarh, passing through Sant Kabir Nagar and Ambedkar Nagar districts. Adityanath has issued orders to start work on the expressway within the next three months. The project is likely to cost the state government over Rs 5000 crore and will need around 1100 hectares of land. Rs 1,000 crore had been allocated for the 90 km long expressway in the budget this year. Bids for this project are likely to be invited soon.

Just two years after it was proposed, around 79 per cent of the land acquisition for the Bundelkhand Expressway has been completed and, in line with Adityanath’s demand of starting work on the expressway in three months, authorities are set to invite bids this month to award contracts for the implementation of the project. 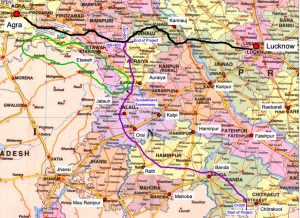 Bundelkhand expressway project is critical because the centre is planning to develop this region as a defence corridor. The state government has identified over 5,000 hectares of land for the defence corridor and sanctioned Rs 500 crore earlier this year for the consolidation of a land bank in the area from which allocations can be made to private sector firms willing to invest in defence manufacturing.

Apart from Kanpur and Lucknow, which have a number of private and state-owned defence firms, Chitrakoot, Jhansi, Agra and Aligarh have been identified as nodes for this corridor.

Construction is likely to start later this year as nearly 80 per cent of the land required for the expressway has been acquired. The state government wants the project to be completed by 2021.

The Ganga Expressway is the state’s most ambitious road project. With the proposed alignment stretching over 1000 kilometers, it will be one of the longest expressways in the country, second only to the under-construction Delhi-Mumbai expressway. 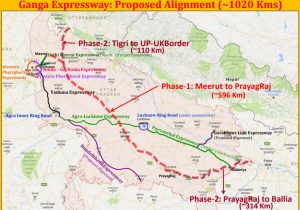 First proposed by the Mayawati government in 2007, the environment clearance granted to the project was canceled in 2009 by the Allahabad High Court as the alignment was proposed too close to the Ganga river’s channel. Construction close to the river channel would have damaged the flood plains of the river. In January this year, the Yogi Adityanath government revived the project, shifting the alignment of the expressway 10 kilometers away from the river channel.

The project is still in a preliminary stage and the government has issued orders to start survey for the expressway within the next three months.

Prakhar Gupta is a senior sub-editor at Swarajya. Follow him @prakharkgupta.